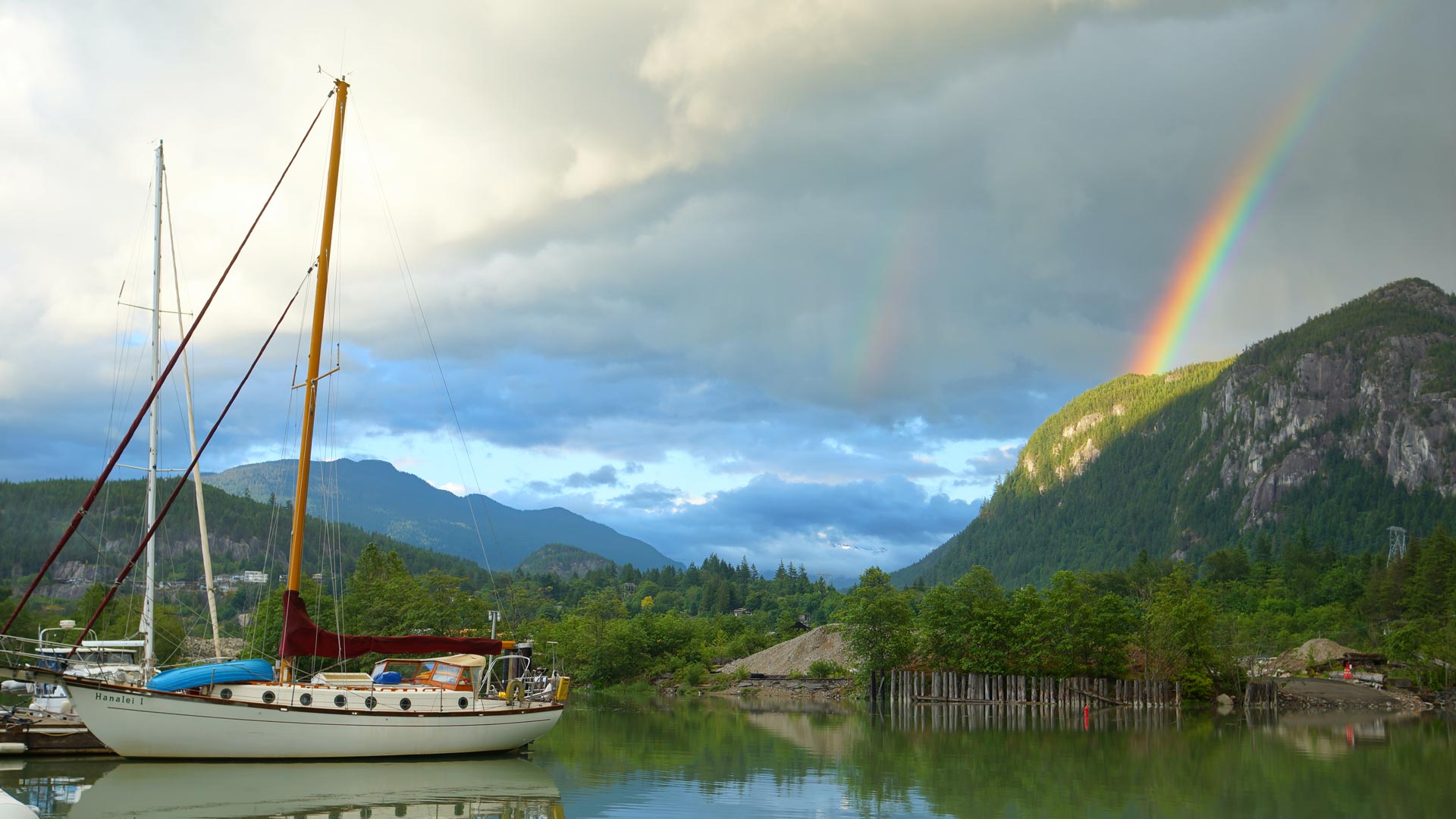 A number of us had our boats tied up at the Govt. dock; a couple at McGee’s floats and one tied up at Schneider’s float beside his tugboat (now Blue Heron Marina). McGee’s is now the Golden Eagle Marina. I think this must have been 1972. A meeting was held in the High School to organize ourselves and get this yacht club underway. Vern Walker was appointed as Commodore, I think he worked on the Woodfibre ferry as skipper then. Charlotte Martin took the first minutes down and then Judy Board was appointed secretary. I believe Cliff Bakke was appointed treasurer. We had a Board of Directors in the beginning and I think they were Sony Davis, Zeb Rieddel, Elgin Tetachuck and maybe Hugh Denny. Hugh owned and operated the “Big Scoop” restaurant where the Mountain Burger House now sits, and he was a good organizer. We got things organized the first year then Hugh became Commodore. He organized some good parties but didn’t seem too concerned about the monetary end of it, which caused concern to Cliff, the treasurer, who was very conservative. One party, I recall, was a Hawaiian type shindig held at the Legion Hall with grass skirts and all. A lot of tickets were sold but not enough to cover expenses. So after the hangovers settled we were in debt up to our armpits but we got through it somehow. Some of the mugs hang in the clubhouse today. I found them in our cupboards; I think I paid around $20.00 each for them to help level the debt.

Hugh organized our 1st club picnic on the water. It was held on the north side, of the east point, on Anvil Island. There are a lot of rocks there!! It was easy getting to the beach sober but a hell of a time getting off the beach and missing the rocks later with a skin full of fire water. Harold Redman was one casualty, I remember. His boat was called “Bankrupt” and lost a prop blade but we all got back to Squamish okay.

Here is a Newspaper article from June 1976:
“…..At 10 a.m. Sunday, a flotilla of boats, power and sail, left the docks when the Squamish Yacht Club held their second annual picnic and steak fry on June 22nd. The weatherman cooperated and the day was spent on the beach of Anvil Island enjoying the sun. There were 17 boats in all with almost 100 people including children. This year the club decided on a family picnic and it was indeed a good choice as members and friends played, swam and rowed around in small boats and dinghies until steak time. A huge pit had been dug and commodore Denny’s grill set was set up. Hugh with the assistance of many of the members, cooked 70 steaks with mushrooms and fried onions. The baked potatoes from the pits were simply delicious! In the meantime the children lined up for hotdogs with all the trimmings and were treated to pop. Before the sun went down the dinghies were used to transport the supplies back to the boats and soon all were heading for home or a short cruise up the sound. All in all everyone agreed that this was another successful event by the club and every one would be talking about it for next year…..”

Elgin Tetachuck was commodore from 1975-1976. As I recall, we had a lot of parties then but kept the cost down by partying on our boats. It was not unusual to have the local law enforcement officer come down to the docks and ask to have the volume turned down around midnight. Elgin and Sharon left Squamish and went to the Cook Islands where they still live. I took over as commodore in 1977-1978 and put on the first Sail Past with the help of the Deep Cove Yacht Club; they even sent up two members to see we did it right. It was held at the Government docks and the boats sailed past in the channel because there weren’t many in those days. The editor of the Times newspaper was on my boat as was a fellow with a cannon. They were both on the front deck. We near lost the editor overboard when the cannon was fired to start the event. Apparently too much powder had been put in the damn thing, but we sure got news coverage that day.

“….Following the powerboats were the sailboats led by H. Obieglo. When all the boats had passed the flagship John Tallakson of the Black Powder Club, fired the second of two cannon salutes ( the first was for the power boats)…..”
“….Fleet Captain Marv Ferg of the Deep Cove YC presented the SYC with their burgee and an atlas titled “Exploring the BC Coast” at the dinner which followed the sail past….85 members attended the dinner…”

Jean and I had two girls, Carole and Coreen; both of them wanted a dinghy race in front of the banks where the clubhouse now stands. It was a grand affair and it even included a blindfold race (the blind navigator). Because it was such a success, we held them frequently after that.

We also had some good fishing derbies. I remember a dogfish derby, which I won but Sony Davis protested, as my dogfish was only 20” long but weighed 22 lbs. He found 19 lbs of lead weights in it; I don’t know how that happened? The kids sure enjoyed those fishing derbies and the dinghy races too.

The seventies were a busy decade for Squamish Yacht Club members. Carl Ingraham and I bought the “Expo” float which is attached to the original Govt. float. We got it at an auction where the assets of the 1986 Expo were being sold off. I think Mike Lloyd and I towed it to Squamish. It was built to last for four years and is still going strong in 2004; it turned out a good deal for us. Once the club got a clubhouse, moorage and hydro on the docks things started getting busy. It was decided we needed a flagpole to be proper. Elgin Tetachuck drove a log truck past the clubhouse two or three times a day, usually starting around midnight and he took on the job of bringing in a lovely yellow cedar pole for us. We found it in the yard early one morning. How he did this we were never sure. Elgin decided he would dress the raw log and make a proper flagpole out of it. He worked many hours getting the bark and knots out of it; he did a lovely job too!! Then, much to his disgust, it went missing; no one to this day owned up to the great theft. Elgin, being the intrepid boater, immediately got another pole and set to dressing it. He was successful on this one and it now stands proudly in our yard by the clubhouse. Around that time it was decided, by our esteemed executive, that we needed to expand the clubhouse.

Jerry Steves worked for the B.C. Telephone Company and got us their old garage, from behind the telephone exchange building, on Cleveland Ave. It was dragged down to the waterfront and made into a clubhouse. This was half of the present clubhouse, the kitchen side today. This meant we didn’t have to meet in the Capilano College room on Cleveland Ave. any more. We had arranged a lease with Weldwood for the lots where the clubhouse now stands. We needed a wall built to hold the bank and got Vic Hurford to build it. We would need $17k, so four of us went to the Royal Bank and got a loan (as long as we signed separate guarantees). We got the money but as it turned out no one signed the papers! John Buckham, my neighbor and the new bank manager, nearly had a heart attack when he found this out the next year. All turned out well and the money was all paid back much to John’s relief. This couldn’t be done today.

Over the winter of 1973 the members built floats in Zeb Ridell’s shop, where Sea to Sky towing now resides on Buckley Ave. In the spring we transported them to the waterfront and between Harold Redman’s tow truck and my crane truck we got them in the water. Now we had our own moorage. Great! A deal was struck with the Dept. of Oceans & Fisheries, to exchange docks. The Govt. floats used to be on the north side of the Govt. dock. This switch has given the yacht club much more moorage space; also the Dept. agreed to leave the inner float in place where it still resides today (The dinghy dock is attached to it). It took a lot of dining and boozing to convince the Govt. representative that this was a good idea.

The Imperial Oil Fuel outlet was removed from the dock, which was disappointing, but Esso said it was necessary. The Esso bulk plant at the head of the Govt. dock (where the parking lot is now) also went.

Eventually we got some hydropower on the floats and we had a genuine yacht club. The clubhouse was expanded and more floats installed as time went on. We also built a boat ramp on the south lot as we had removed the original to build the wall. Keith Koch took on the job and ran a large crew of boaters who put together a fine building. However, in the haste to get the building erected and joined to the existing building a feature was overlooked. You may have noticed the exhaust fan in the wall of the men’s can and wondered about it – just a casualty of speed on the job. Speed was needed as no one had a building permit at the time. The amazing Jerry Cotter, woodworker, flight controller, superior skier and all around bull shitter took on the job of building the bar, which we enjoy in the clubhouse. He called me one Saturday morning and asked for help to get it from his place to the clubhouse. My God it was heavy! We wrestled it up on the sundeck and attempted to bring it through the sliding glass doors. An amazing thing had happened, the glass doors had shrunk and the bar would not go through. Other club members arrived to help but to no avail. Of course Jerry had measured the doors one month before, I guess when the sun was shining. Anyways, we had to remove the whole damn door. Looking on the positive side –  it can’t be stolen.

At one time we even had a fuel dock at the south end of the clubhouse and a buried tank under one of the sheds there. A combination of empty tank and high tides brought the tank, slab, shed and all well above grade. Eventually this enterprise was abandoned. We have always had a problem with earth sloughing away from behind the retaining wall. A lot of different material has been put in the holes. One of the best was cedar bark strips that we got from Carney’s shake mill, which stood south of the boat ramp. Mary Lou Stathers had a terrifying experience once when she fell through the lawn and found herself below grade where the new deck now stands, and she wasn’t even partying, as I understand it.

A lot of members have contributed their time to this club, which was set up to give cheap moorage to Squamish boaters.

It looks like we’re in for change at the old yacht club. I think this is good as long as it is for the better of us all. Let’s all pull together and work for the club’s future as was done in the past!

Member Login
Perfect boating conditions for the cruise to Plump

Anyone else leave the dock this August long weeken

Serving it up until late into the night #SeafoodNi